Devin Townsend has announced that the show in London on the 17th of March will feature the ‘Ocean Machine’ album being played in full to celebrate its 20th anniversary! …20th!? Damn I feel old! Be sure to get your ticket if you havent already, support comes from the amazing Leprous and Tesseract! Its going to be a fantastic night! Full tour dates below: 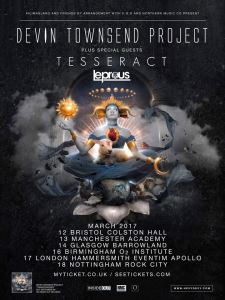